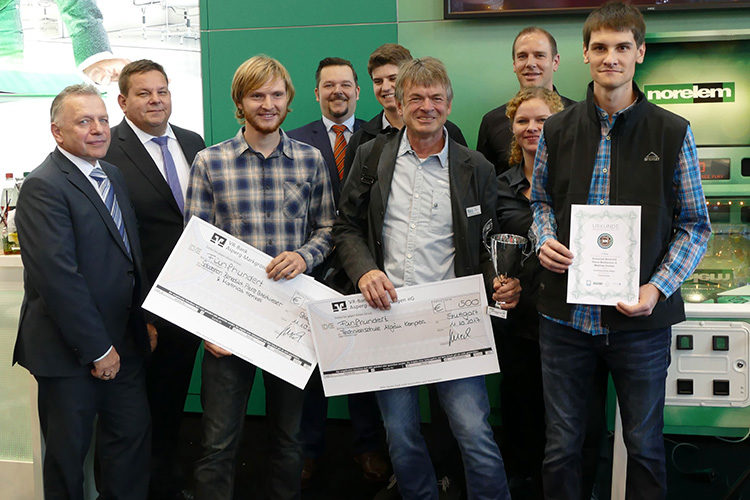 For the fourth time, norelem and CADENAS, supported by the “Bundesarbeitskreis Fachschule für Technik” (a federal working group that supports vocational training candidates on their path to becoming certified technicians) and solidpro GmbH awarded the Engineering Newcomer Prize for outstanding (university) school projects. This year, the coveted prize went to Tim Schobel from the University of Stuttgart.

The Engineering Newcomer Competition was first launched in 2014 to give up-and-coming talents the opportunity to present their interesting, self-developed design project to a wider audience. This year, 31 teams from Germany, Austria and other European and international countries took part. The award ceremony for this year’s Engineering Newcomer took place on 11 October at the Motek trade fair in Stuttgart.

The winners of the Engineering Newcomer Challenge 2017

Tim Schobel from the University of Stuttgart took first place this year. He successfully won over the jury with his project “Design and prototype production of a compact, electric drive unit with freewheel function for a rollator”. When driving uphill, the drive unit provides the necessary power to drive the rollator independently and serves as a useful support when driving downhill. This means that the user enjoys enhanced safety while requiring less effort.

Class TM2C from the Technikerschule Munich achieved second place this year. Within the scope of a project entitled “Planning, design, production and programming of a 4.0-capable production plant”, a total of 29 students developed a production plant within 9 months, which will be used in future for the technical classroom facility used by control and automation technology.

Third place went to the three students Sebastian Benedikt, Pierre Breitwieder and Matthias Henkel from the Technikerschule Allgäu Kempten. With their “Twinwheeler”, the students demonstrated not only creativity but also their design skills. The Twinwheeler can be used for leisure activities as well as a second car.

For the first time, the most creative educational institution was chosen this year from the list and rewarded with prize money of EUR 500. The All-time List is based on the number of submissions from an educational institution. The institution receives one point for each project submitted. There are additional points for the winning schools, according to their placement, which are summarised in an overall ranking.

This year, we would like to congratulate the Technikerschule Munich, which successfully took first place with a total score of 20 points.