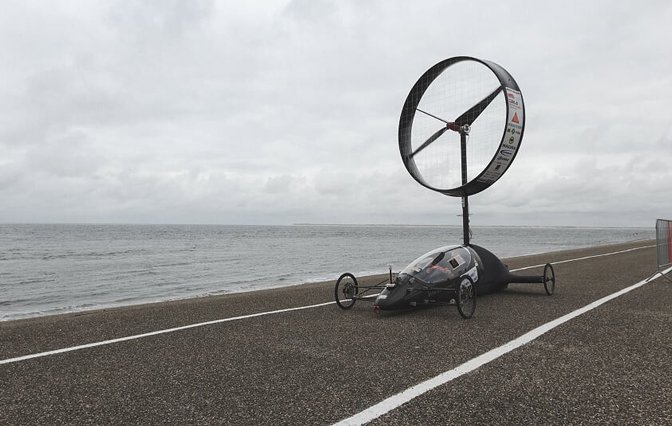 Team InVentus at the University of Stuttgart is developing a vehicle that can drive directly against the wind while being powered exclusively by wind energy. The highlight of the season took place at the end of August 2018: the Aeolus Race in Den Helder, Netherlands. The team achieved a remarkable second place in the overall standings.

Spanning a total of 5 days, Team InVentus competed with other teams from all over the world. The participants included a total of 7 student teams from 6 countries. The challenge: to drive as effectively as possible with wind-powered vehicles on the dike while heading against the wind! During three days of racing, teams competed in 4 categories: the average long-distance speed, the highest maximum speed achieved, acceleration over a distance of 100m and the innovation of each wind-powered vehicle.
The innovation from InVentus was the newly developed hybrid drive concept. It consists of a mechanical main drive train and a fully autonomous electrical system with additional rotor. In the mechanical drive train, the straight toothed spur gears from norelem were used. Thanks to the different pairs of gears found in the quick-change gearbox, these can be switched out quickly and flexibly during the race, in order to react to the demanding wind conditions. The hybrid powertrain was also praised by the other teams and clinched first place in the Innovation Award.

Other successes enjoyed by the team: In the average speed over long distances category, they reached 3rd place and in the top speed category they set a new German record with 95% of wind speed. In the acceleration category they attained 2nd place. The norelem ACADEMY congratulates the team on this outstanding performance and is delighted to have been a part of it.

norelem.deTrainingscenterCADTHE BIG GREEN BOOK
Thanks for your donation. Please goto Paypal to finish your donation! If it not auto redirect, please click on "Goto Paypal" button.
Goto Paypal